Daily Apple Consumption Helps the Heart.
Consuming fresh fruit, such as apples, each day appears to reduce the risk of dying from either a heart attack or stroke by about one-third. Investigators collected data on more than 500,000 adults between 2004 and 2009 and found that fewer than one-in-five ate fruit on a daily basis. However, the researchers found that those who ate about a half cup of fruit a day had a significantly lower risk for developing cardiovascular disease. Lead researcher Dr. Liming Li reports that participants who ate fruit the most often had lower blood pressure and blood sugar compared to those who ate less fruit, which could explain the reduced risk for heart attacks and stroke.
New England Journal of Medicine, April 2016 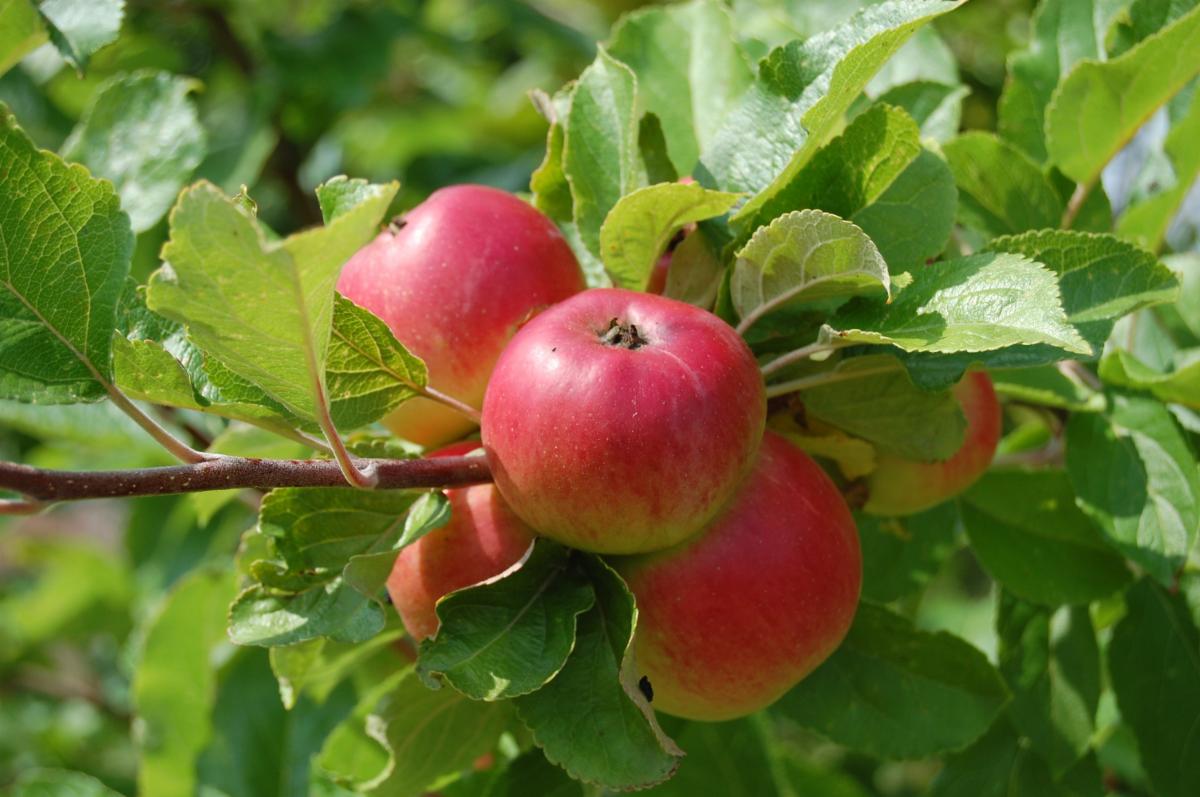 Mental Attitude: Sleepless Nights Linked to Changes in the Brain.
Chinese researchers report that insomnia may lead to abnormalities in the white matter of the brain, the tissue which carries information between the various parts of the organ. For the study, the researchers recruited 23 patients with primary insomnia and 30 healthy volunteers. The participants completed surveys that allowed investigators to evaluate their mental status and sleep patterns. Using an advanced MRI technique, the research team also looked at the pattern of water movement in white matter to identify any irregularities. They found that participants with insomnia had significantly reduced white matter integrity in several regions of the brain including the thalamus, which regulates consciousness, sleep, and alertness, as well as the corpus callosum, the area that connects the two halves of the brain. Researcher Dr. Shumei Li notes, “Our results can potentially provide the evidence about how the lack of sleep may lead to the impairment of white matter related to emotional or cognitive disorders.”
Radiology, April 2016

Health Alert: Diabetes Has Quadrupled Worldwide Since 1980.
According to a new report, the number of men and women diagnosed with diabetes around the globe increased from 108 million in 1980 to 422 million in 2014, with the most severe increases noted in low- and middle-income countries. Experts say these findings should sound an alarm for large-scale, effective action that focuses on reducing the health and economic impact of diabetes.
The Lancet, April 2016

Exercise: Too Few Children Get 60 Minutes of Exercise Daily.
In this study, investigators observed 453 schoolchildren during a one-week period and found that only 15% achieved the recommended 60 minutes of moderate-to-vigorous physical activity (MVPA) each day. Furthermore, compared with normal or underweight children, the researchers report that the overweight and obese children in the study were be less active overall and achieved fewer minutes of MVPA during school, out-of-school, and on weekends. Senior author Dr. Jennifer Sacheck comments, “Clearly, schools need to be aware of this disparity and should focus on increasing all intensities of physical activity equally for all children across the school-day.”
International Journal of Behavioral Nutrition and Physical Activity, March 2016

Wellness/Prevention: Vitamin D Levels Linked to Cardiovascular Disease Risk.
New research suggests that the risk of cardiovascular disease could be predicted by measuring levels of total and bioavailable vitamin D in both men and women. The study analyzed the vitamin D levels of 4,200 individuals aged 52-76 and assessed whether vitamin D levels had any effect on future cardiac events. The findings revealed that individuals with low levels of both total vitamin D and bioavailable vitamin D were at the greatest risk for heart attack, stroke, heart failure, and even cardiovascular death.
American College of Cardiology Scientific Sessions in Chicago, April 2016

Mental Attitude: Chronic Stress Can Affect Memory.
Individuals subjected to chronic stress due to bullying or a tough job may experience problems with their memory. Researchers found that mice who were repeatedly stressed by larger, more aggressive mice when they tried to find an escape hole in a maze became more forgetful than mice not exposed to the aggressive mice. The researchers say that the mice’s inability to remember coincided with stress-induced inflammation in the brain. They hope that a better understanding of stress, cognition, and mood problems may help create strategies for those suffering from anxiety, depression, and post-traumatic stress disorder.
The Journal of Neuroscience, March 2016

Health Alert: Secondhand Smoke Exacerbates COPD Symptoms.
Chronic obstructive pulmonary disease (COPD) is a chronic lung disease that makes breathing difficult and is the third leading cause of death in the United States. A recent study found 20% of COPD patients live with an active smoker and 27% were exposed to secondhand smoke during the previous week. For the COPD patient, secondhand smoke exposure is linked to a greater risk for severe exacerbations (51%), nocturnal symptoms (58%), wheezing (34%), and chronic cough (77%).
Thorax, March 2016

Diet: High-Fat Diet May Raise Cancer Risk.
New research suggests that a high-fat diet could increase the risk of colon cancer. In this study, researchers fed healthy mice a high-fat diet (60% of total calories from fat) for nine months and found the mice gained 30-50% more body mass and developed more intestinal tumors than mice on a control diet.
Nature, March 2016

Exercise: Brain Chemicals Affected By Exercise.
Researchers have found that people who exercise not only have better physical fitness than inactive persons, but they also have better mental fitness. Using MRI scans, researchers found that intense exercise increased the levels of two common neurotransmitters called glutamate and gamma-aminobutyric acid in study participants. The finding offers insights into brain metabolism and how exercise could become an essential part of treating depression and other neuropsychiatric disorders associated with deficiencies in neurotransmitters. Lead researcher Dr. Richard Maddock adds, “We are offering another view on why regular physical activity may be important to prevent or treat depression… Not every depressed person who exercises will improve, but many will. It’s possible that we can help identify the patients who would most benefit from an exercise prescription.”
Journal of Neuroscience, February 2016

Chiropractic: Is it CTS or Double Crush Syndrome?
Many patients with carpal tunnel syndrome (CTS) may also have median nerve entrapments further up the course of the nerve (in the neck, shoulder, elbow, etc). When the median nerve is encumbered at two anatomical locations, it’s described as a double crush syndrome (DCS). In this study, researchers compared the results of nerve conduction velocity (NCV) tests on patients with CTS and patients with CTS and cervical spondylotic radiculopathy (an example of DCS). The results showed worse nerve function in the patients with DCS, supporting the possibility of more severe CTS symptoms with a lower likelihood of resolution if treatment only focused on the wrist.
Journal of the Chinese Medical Association, September 2015 (Note- we treat both of these conditions with a combination of Active Release Techniques (ART) and chiropractic work. Call us at 303.300.0424)

Wellness/Prevention: Experts Unsure If Seniors Should Have Routine Vision Checks.
A panel of experts concludes there is not enough data to say whether or not seniors should be routinely screened for vision trouble by their primary care physicians. According to the panel, primary care doctors typically check vision with an eye chart test and while this test can detect refractive errors, it does not identify early stage age-related macular degeneration or cataracts. Task force member Dr. Michael Pignone notes, “Older adults who are having vision problems should talk to their primary care doctor or eye specialist… in the absence of clear evidence, primary care doctors should use their clinical judgment when deciding whether to screen for vision problems in patients without vision symptoms.”
U.S. Preventive Services Task Force, March 2016

A review of 129 studies on temporomandibular disorders (TMD) found that TMD patients are three-times more likely to have experienced whiplash trauma. TMD patients who also suffered head-neck trauma reported more TMD-related jaw pain, headaches, and stress symptoms. According to the authors of the review article, “These results suggest that whiplash trauma might be an initiating and/or aggravating factor as well as a co-morbid condition for TMD.”
Journal of Oral Rehabilitation, January 2014

The Feburary 2010 Denver Chiropractic Center Newsletter – The Dr. Glenn Report – is on the website.

Pull-ups, Bodyweight training for a strong back and healthy shoulders

How to get your aging hips moving in the morning

Who else wants 2 FREE massages?